“Its yellowing pages contain cookery tips and recipes for such delights as Stewed Calf’s Head and Wintry Night Soup.”

A few weeks ago I posted a photo of my Mum, Gwen, on Facebook to commemorate the 10th anniversary of her death.  An old boyfriend commented, ‘Still the best shortbread in the world!’

Mum was a wonderful cook and loved having family and friends over for meals or for a cuppa.  She’d reach into the cupboard and out would come Tupperware containers of cakes, biscuits and slices.

And yes, her shortbread was the best in the world.

I have two of Mum’s old cookbooks.  One is a huge tome with a blue embossed cover entitled Australian Cookery of Today Illustrated, which was put out by the Sun News Pictorial in the early 1950s.  Its yellowing pages contain cookery tips and recipes for such delights as Stewed Calf’s Head and Wintry Night Soup.

The other is the real treasure.  A battered spiral bound exercise book full of recipes cut from newspapers and magazines, or written in Mum’s familiar loopy handwriting.

Here are all the things she loved to cook – Athena’s Biscuits, Coconut Macaroons and, on a piece of lined notepaper, written in my own childish hand, the recipe for her Scotch Shortbread.  The heading is decorated with a tam-o-shanter and reads as follows:

Method:
Beat the butter to a cream and gradually add the icing sugar, flavour with vanilla.

Bake in mod oven 30 to 40 mins until golden brown.
Cut into even what ever-u-want while hot & leave to cool. 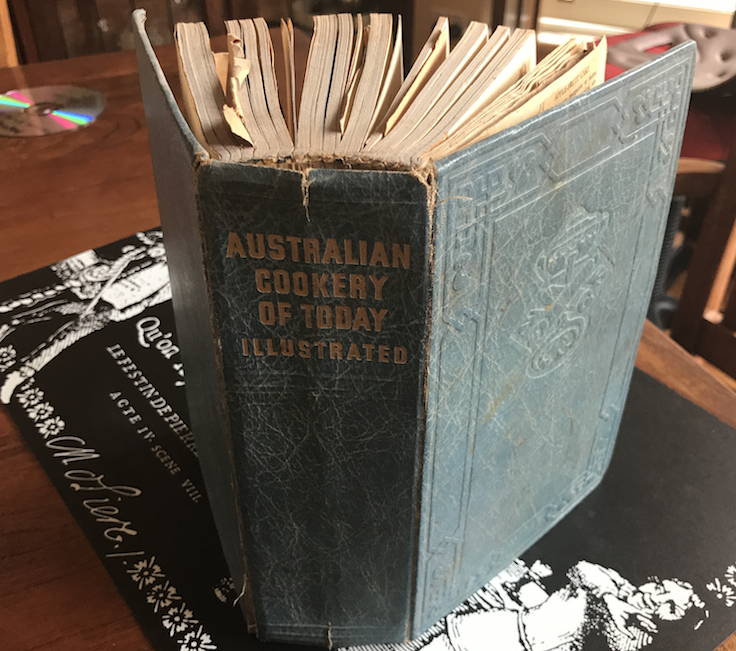 Barb Hughes is the Executive Officer and Secretary of the Williamstown Literary Festival.  She is a Williamstown resident, occasional writer and self-confessed theatre tragic.  Barbara’s short story, The Visit, was shortlisted for the 2013 Ada Cambridge Biographical Prose Prize and she writes regular theatre reviews for the Melbourne Observer.  Barbara is the current Vice-President of Williamstown Little Theatre and her theatrical interests include performing, directing, viewing and administration.