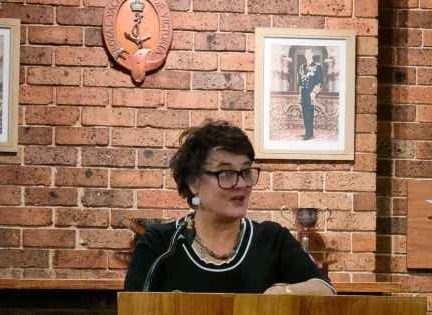 Thank you – Mayor, Councillors, invited guests one and all, to the Royal Yacht Club of Victoria for hosting us and most especially to the committee who have worked so hard to get us to this point.

Isn’t it fantastic we now make it a priority to make an Acknowledgment to Country? That we now wouldn’t think of commencing an event without this respect paid to the land and this ancient culture, to the stories of our country’s First People.

And isn’t it also wonderful that as creators and curators of a festival of words, of stories here in Williamstown on Kulin Land, get to contribute to an evolving culture of storytelling with so much community engagement.

When we chose the theme of Silver Lining, it seemed at the time, entirely a response to Lockdown. But really, in the weird wash up that is 2021, the Silver Lining encapsulates so much more than we might have initially gleaned in that gloomy, gelid space.

The watershed we are witnessing and in so many ways participating in what we now have come to call the Pandemic Age, is vivid, our response visceral. We watch as scenes explode on ubiquitous screens: Black lives matter, Me-too, Climate Change; we have found a fervour for embracing diversity across culture and gender and identity…in just one year we adapted a new approach to how we work and developed an entirely new attitude toward public spaces and personal distance.

It is breath taking is it not?

Is it any wonder the main symptom an eventual killer of this Corona Virus is an inability to breathe? People everywhere around the world are gasping for air.

Here on this island continent, we are for the most part safe.

We enjoy the precious fortune of natural boundaries, the benefit of geographic isolation. So it’s interesting our gaze is perhaps finally internalising. By fortune’s hand, we find ourselves not gasping, but hungry for stories; finally, we want to hear the stories of our country, and not just commencing with Batman’s arrival in Gellibrand, named, not for a landmark, or an inhabitant, but for a lawyer.

The 2021 Willy Lit Fest actually commenced in February  this year when the marvellous Kate Grenville on Zoom presented  A House Made of Leaves. During the Q and A, she was prompted to reflect on the long term impact of her outstanding novel, The Secret River  and agreed it contributed to a burgeoning appetite for stories of our indigenous past. What exceptional power lies inside a novel? What is a bridge is an author!

On the 10th of December 1992 in the Year for the World’s Indigenous People, Paul Keating stood in the heat swatting flies and delivered his Redfern Speech.

It will be a year of great significance for Australia, he said

This is a fundamental test of our social goals and our national will: our ability to say to ourselves and the rest of the world that Australia is a first rate social democracy, that we are what we should be – truly the land of the fair goes and the better chance.

We cannot imagine that we will fail.

21 years on and we are still, liminal, barely toes deep in the shallows as we edge toward, we hope, the beginning of real change for our first nations, for women, for the planet.

We cannot imagine that we will fail.

In January 2021, after four bleak years of the Trump Administration …a silver lining or maybe it was a ray of sunshine that appeared when Amanda Gorman dressed in yellow suit and red headband, cracked open the weary hearts the world over.

And so we lift our gazes not to what stands between us,
but what stands before us.
We close the divide because we know, to put our future first,
we must first put our differences aside.

We did not feel prepared to be the heirs
of such a terrifying hour
but within it we found the power
to author a new chapter.
To offer hope and laughter to ourselves.

Amanda Gorman’s The Hill We Climb  at the Biden inauguration was the inspiration for our Opening Night Event.

Please join us on June 18 at the Williamstown Italian Social Club where will celebrate The Speech. What’s your favourite speech: I have a Dream, we will fight them on the beaches, because nothing will save the Governor General and I will not be lectured about sexism and misogyny by that man’

Speakola curator and author of more than twenty books, Tony Wilson in conversation with the award winning author, activist and academic Tony Birch, together will celebrate the speeches that made us and moulded us, the great and the good, the terrible, potent  power of public oratory.

Opening night will not only be a lot of fun, food, and music, but it will mean we have made another year to share great story telling in the same room, …together.

‘first we lived on farms, then we lived in cities and soon we will  live on the internet.’ That’s a quote from Aaron Sorkin, The Social Network. It certainly seemed like we lived on the internet last year. In February 2020, the committee met on the steps of Williamstown Library and made the bleak decision to cancel.  We fell, as so many dominoes into  Lockdown 0.1. The lights went out and the theatre went dark and so did I. It was gob smacking. All that work. Our 17th year was very nearly a palimpsest. But an 11th-hour move by our sponsors at Hobson Bay City Council kept us afloat to create the seven-part as digital festival. We adapted, thrived, and lived to tell the tale of 2020 Vision, more tele vision than festival perhaps but still on record.

So, I hope you will all join us for that Opening Night, for as we have learned, nothing is certain. Curating this festival has been like juggling eggs and with 6 weeks to go, all we can do, is countdown the days and remember to breathe. Winter is coming and so…would you like to know who’ else is coming to Winter?

In category of non-fiction authors, fresh off the back of her critically acclaimed book  The Trauma Cleaner, Sarah Krasnostein and The Believer; Faith, Spirituality, Conspiracy theories.

Have you ever wondered why a part of Hobsons Bay is calls Truganina? Cassandra Pybus is a great, great, great granddaughter of Richard Pybus, gifted by the Briotish a large slice of Bruny Island. Truganina a Nuenonne woman was often seen in the area. With mixed emotion Cassandra Pybus documents an epic ordeal of Truganina seven decades, including her voyage to the Kulin Nation.

Young Adult novels are among the most diverse, culturally critical and dystopian works in the shelves. We are delighted to host three must-read authors if this field. Lily Wilkinson, Amie Kauffman and from Perth Holden Sheppard give their take on what it was like to write in the shadow of a world even stranger than their own inventions.

Laura Bloom glides in from Mullumbimby with the Women and the Girls, in conversation with Sarah L’Strange. Black and Write fellowship recipient Nardi Simpson’s arrives from Sydney with The Song of the Crocodile. If you haven’t already, you will want to read it before she sits done with author and comedian Nelly Thomas to talk about how writing music cleaved to become her debut novel.

We go a little nuts on science this year with the hit series Stem Stars. Wild Dingo’s beautifully executed concise biographies of Australian science stars, written by equally illuminating Australian Authors and we have three of them joining us, Claire Saxby, Rebecca Lim and Emily Gale for the 10- 13-year-olds. And who better to moderate this session than a local Science star and Williamstown High School student Elena Turner in her first but likely not her last outing as moderator.

Before I mention what we have planned for our flagship events; I want to mention the support of Hobsons Bay Libraries this year who have gone above and beyond. In the first instance, we have been partnered to curate three specific library-based events for which I want to give a shout out to Johneen Kier for all her assistance. Julie Anne Grasso will be reading to kids 7 and under at the Library Friday at bedtime.

And we have on Saturday, fantastic free event with authors Nevo Zisin, Amal Abou Eid and comedian and children’s author Cal Wilson discussing the importance of diversity in reading to your kids. Those of you who know Amal, will appreciate what a brilliant advocate she is for diversity in reading. And the Homegrown Hobsons Bay Authors return with another great panel, delight titled the Sea of Dreamers.

But more than that, this year, this Covid Normal year we give a nod to the great urban realm, our wonderful backyard of Hobsons Bay that gave so many of us sheer delight during lockdown in taking the time to smell the roses as we wandered down streets and laneways we never realised were right there.  We celebrate the Street libraries of Williamstown with support from Amber Cassidy and Ben Pollard at Hobsons Bay Council …. Culture and Community.  Did you know there are maps of our street libraries, have you ever considered starting one yourself?  If not, join Yarraville author Nick Gadd with his Walking Circles session and catch a glimpse of some.

There are workshops, there are walking workshops, one will even lead you to the morgue. There are Awards, the People’s Choice had a bizarre year online last year and yet it was fantastic. But we return to the cosy atmosphere of the hidden gem, the Pirates Tavern for another spoken word vamp.

Hugh has already mentioned the Ada Awards of course and the new Burbidge prize.

And so, all that is left is to spin you the final layer.

Every year the festival aims to bring the weekend to a close with an appealing headline act. This year closing night champions the Heroes Next Door with brother-sister co-authors Hilde Hinton & Samuel Johnson OAM in conversation with ABC 774’s Jacinta Parsons herself an author of Unseen.

So, it all sounds very worthy, Stella but what about some fun, I hear you say.

What we plan to do is establish a glittering evening, with a shiny line up of celebrities. We will be asking our patrons to dress in silver, wear their silver, bring their silver even, as the evening will be a completely covid safe and rubbish free, it’s a BYO event. Bring a hamper, a bottle of fizz, your own silver ware., It’s clever, isn’t it? Then, when we have 280 well-dressed Williamstown folk in their best kit and expensive bling, we will lock the doors and make out like bandits. And while you are hermetically sealed inside the ballroom, we will round up the street urchins in our league and Fly My Pretties…. clean out your homes one-by-one thanks to the data collected effortlessly from contract tracing.

See, you thought I was honoured and humbled to contribute to the18th year of story telling in Williamstown… really my three years as Program Director has just been a long con, a way to pay for the next publishing venture and extensive research for my next crime novel.  You’ve all been had.

May I entreat you please, to say with absolute lack of clarity in the age of the pandemic, we hereby launch the 2021 Williamstown Literary Silver Lining Festival.